National Day in Abu Dhabi is like America’s July Fourth, but amplify that times 10. They make a week long celebration of it. You’d think I couldn’t wait to tell you about it. Here, holidays are for leaving! So I left…..

Egypt was amazing. The only one of the seven ancient wonders of the world that still exists was seen with my very own eyes. I was blessed to have a tour guide on this visit who is a university trained Egyptologist. He studied under the great Zahi Hawass. 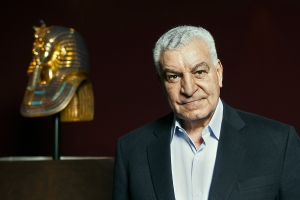 It’s not safe there: This statement couldn’t be further from the truth. I’ve never felt any sense of danger. The people were welcoming. They did come on pretty strong trying to sell us their goods. The 2011 Revolution hit their economy pretty hard. Tourism is how they can sustain and the revolution caused tourist revenue to drop 75 percent. The hustle game is real there. When I was asked to buy or give money I just kept quiet unless it was something I wanted. You can’t barter with a mute.

They don’t like Americans: Straight BS. They love us. I think all of the things that happened there scared everyone away. Their revolution was THEIR revolution. Not visiting Egypt for that reason is like a person from Asia saying they’ll never visit the U.S because of what’s happening in Ferguson. Two things that have nothing to do with one another. It’s perfectly safe.

Theft: I was led to think I’d be pick pocketed at the pyramids and nonsense similar to that. No way. I felt a little guilty for feeling this way about my people, about the cradle of civilization but now I know better. You can get hustled at these places of interests but not robbed.

When you first lay eyes on the Great Pyramid you can’t do anything but be in awe… and then take lots of pics, which is exactly what I did. Scholars could not fathom that Africans built the pyramids. Some even went so far to say that they were created by aliens. Being on and in something so magnificently baffling was life altering. I’ll be honest, I was hell bent on bringing a piece of the pyramids back with me. The ancient Egyptians were smarter than to create something that can be so easily dismantled. They would have crumbled thousands of years ago. Those bricks were super solid. The lower base bricks weigh 15 tons and the bricks toward the top are 2 tons each. It is thought that the Great Pyramid took about 20 years to build. I won’t go into too much detail because I want you to go there.

We arrived in Cairo from Qatar (which has a pretty cool airport for the Middle East). Our representative from Love Egypt Tours was right there waiting for us. When we got to the hotel room and opened the curtains, there were the pyramids in all their magnanimous glory. The best move ever by my roomie was to request a pyramid view room.

That night we went for a dinner cruise on the Nile River…….THE NILE!!!

*All photos taken by me. I had to get a professional camera for this huney. No iPhone pics for the great Egypt. 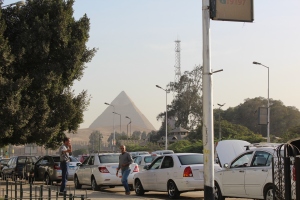 The Nile River at Night. Beautiful. 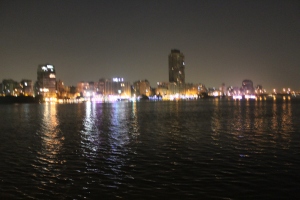 This was the day I’d been waiting on, The Giza Pyramids. The sun was just rising over the Great Pyramid as we arrived. Of course, we took a million and one pictures before we even got out of the van. I didn’t want to do the cheesy, common pictures of you holding the tip of the pyramid but I couldn’t resist! I just won’t show you all lol. 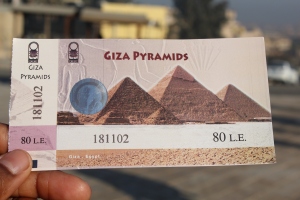 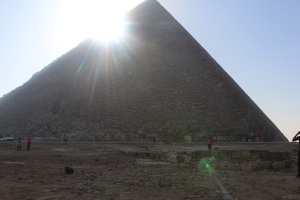 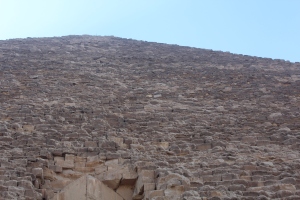 We got an elaborate explanation of how the stones were created, put together, and brought to the top. How did they do it? Go to Cairo and hear for yourself :). We rode a camel to see the pyramids from a different view; where we could see all of them at one time. Camel rides and horse rides…two totally different things. Camels are seated when you first get on and they rise up from their hind legs first. This makes it feel like you are going to fall off, face forward. When they are rising you have to lean way back to keep from tumbling off. 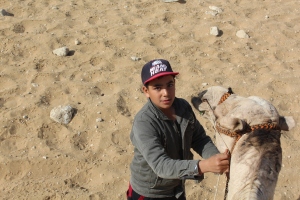 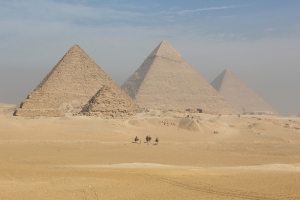 After the Great Pyramid was the Sphinx. It was everything I thought it would be. You can’t get as close to it as you’d like to. I personally wanted to sit on the paws, but with all the guns protecting it I fell back a bit. I didn’t take many pictures there because all I wanted to do was just be, and take in all the splendor.

We then went to the 2nd pyramid and got the opportunity to go inside. The Egyptians were short and tiny. You cannot stand upright and descend into the pyramid. This journey is not for the claustrophobic, but it does eventually open up. I’m 5’7 and the entryway came to my neck. At one point, we bear crawled into the tomb. It was the easiest way.  Entering the burial room with the stone coffin was odd and majestic. I mean to be in a room, under ground, that has survived for over 3,800 years was amazing. Some of the brave souls on the trip actually got in the coffin. I wasn’t that brave. 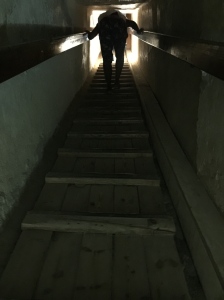 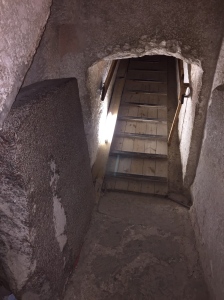 This me. Sneaking pics. Because we had our cameras taken, but not our phones! 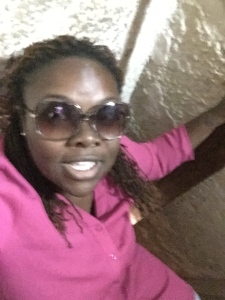 Next we went to a papyrus shop where they made paper from it the same exact way ancient Egyptians did. The paper takes a week or two to make and it lasts forever. We got custom made art on the papyrus. 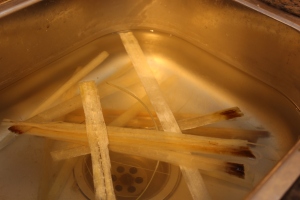 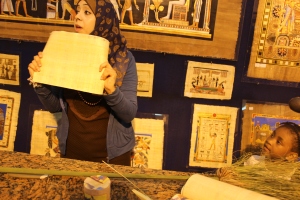 While we waited for them to finish our orders we went to The Egyptian Museum of Cairo. Ever since I saw Zahi Hawass on National Geographic showing the artifacts in this museum I knew I had to come. The treasures in this building are indescribable. Because some of the artifacts are massive, not everything is in a glass case. I was told not to touch any of the things, but there was no rope keeping me away. I felt up those hieroglyphs the way Ralphie felt up that leg lamp in “A Christmas Story.” I probably had the same look on my face as I was doing it too.

You can’t just say, “ don’t touch,” not with me. I need armed guards around. I mean, this was a life dream coming true! I saw wigs that look NOTHING LIKE what they portray on television or books. Every last one of the wigs, carvings, and statues of women is with braided hair. Fly, with a mean asymmetric cut on some.  Don’t believe the lies. I laid my eyes on the treasures of King Tut’s tomb. I saw his burial items, his canopic jars, the arrows he hunted with, all the lavish gold and turquoise jewlery, and the infamous burial mask. I tried so hard to get a picture, but they were watching me intensely.  I wish I could tell you more, but I really want people to visit. It’s too much to tell anyway. I can tell you about Isis, the goddess of life and magic. Her face is on the front of the museum. It had me in a trance. I’d never seen a statue of a African women in person that wasn’t a slave or looking depressed. I was enamored. I loathe that her name has been tainted by an extremist group.You can email me about details and I will respond if you have any questions, but I couldn’t post most of the pics I have. I could only take pictures outside of the museum. Most of the statues outside had the noses taken off. Still researching the reason for that. 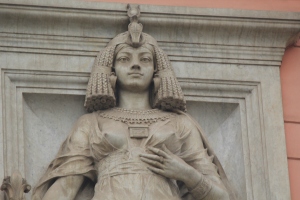 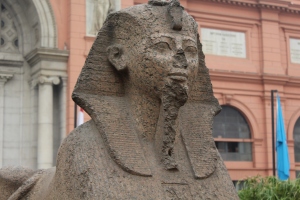 We left the museum, picked up our papyrus, and went to get some Egyptian oil. Day 2 was a packed one. We did more than I thought.

We started our day at the Imhotep Museum where we learned about his legacy and contribution to the entire thought of a pyramid design.

We then went further out to view the very first pyramid ever, The Step Pyramid. Imhotep designed this for the pharaoh as like a stairway into heaven. This entire structure was under sand; only the top showed. They unearthed the Step Pyramid not realizing they were burying a nearby temple. Of course this has been figured out now and they have brought most of the pieces of the temple to the surface. They were still doing excavations while we were there and we were under strict orders to not take any sand or rocks as they could be possible artifacts. And as expected, we took lots of pics.

A model of how it looked when Imhotep designed it.

Part of the unearthed temple.

We left there to visit The Hanging Church. It literally is in the air. I can’t explain it. I barely understood it while I was there. All I know is that while in it I could see it was suspended in the air because there was no bottom.

The coup de gras of this part of the trip was going to the church that  is supposed to have housed Jesus and his family while they were on their way out of Egypt. They stayed there while fleeing the decree of Herod for all infants to be killed. This church, Saint Sergius Church, is the oldest church in Egypt dating back to the 4th century. They wouldn’t allow any picture taking at all, but if you know me personally hit me up, okkkay ;). We also went to the area where it is believed baby Moses was found in the basket. Amazing and spiritual experience.

Our last stop was the oldest market in Egypt, the Bazzar. And huney that thang was exactly that, bizarre. There were people everywhere, sellers and beggars. We heard everything to try and get us in their shops. Quite entertaining:

“One yankee doodle, only one American dollar.”

” My sister, I am your brother so buy from me. We are same, Africa.”

” What you are looking for, I have. You have husband? I have that too.”

And I, because of my hair, constantly heard, ” Hey Jamaicaaaaaaa.” I was also asked to take pictures with people. Now in the UAE I get stared at a lot, but in Africa I was thrown for a loop as to why they wanted a picture. Why did he want one? Because I look like Queen Latifah. “You voice even like hers.” I hear this SO MUCH! It’s not upsetting it’s hilarious. I think I look like me!

Khalas (finished)! That was the end of our trip. The next day we went back to Abu Dhabi. This was the best trip by far for me. I’ve heard some people complain that Egypt doesn’t live up to they hype. It lived up to that and more for me. Just like clothes, some people don’t travel well.

I hope that you enjoyed a glimpse into my view of Egypt. Until the next event or trip…..hotep.